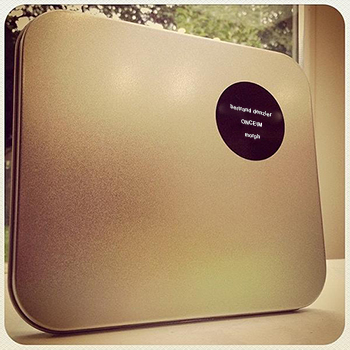 Morph is another piece that is described by Denzler as a « pseudo-drone » which makes it a companion piece to Horns 1.2, the two being issued together by Confront in their appealingly distinctive square metal box packaging. While there are undoubted similarities between the two albums, the differences between them are more significant. Firstly, ONCEIM is a very different animal to Horns, consisting of thirty players—including Denzler, Gerbal, Laurin and Badaroux—on a variety of instruments taking in piano, accordion, reeds, brass, strings, percussion and electronics. Whereas the quartet Horns was created to play Denzler’s pieces, ONCEIM is a well-established ensemble, having been founded in 2012 by Hubbub pianist Frédéric Blondy. The ensemble plays occasional gigs in Paris, at venues such as Église Saint-Merry, where this album was recorded in June 2014. While « Morph » and « Horns 1.2 » are clearly based on the same principle, the greater number of players and the greater diversity of instruments in ONCEIM makes its music dramatically different to that of Horns. Its thirty instruments create a fuller, richer soundscape than the four horns while it evolves more slowly as each change by a musician is one thirtieth of the totality rather than a quarter. Consequently, the end result is more truly drone-like than its companion piece. Yes, the two are very different, but they shed light on each other and so are best heard together. The same is true of all three of these releases; together they are part of the evolution of Denzler and so each one is an important piece of an ongoing jigsaw. (John Eyles)